Col served the irrigation industry and his community, passionately advocating for their best interests.

In 1995 Western Murray Irrigation Ltd was formed as a result of the NSW Government’s privatisation process and Col became a founding Director, serving on the Board until his retirement in 2014.

In 2015 Col was awarded an Order of Australia medal (OAM) for services to environmental water management and the community.

Western Murray Irrigation would like to pay tribute to Col Thomson’s leadership and his unwavering dedication to his irrigation community.

Our condolences to Marg and family. 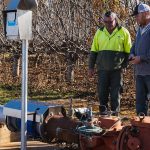